Fearing that the economic crisis would drive Britain into a left-wing siege economy which would endanger NATO and the EEC, the United States and Germany used the IMF loan as a means to force Britain to make major domestic policy changes; when the IMF mission arrived in London in November , it was announced that the price for the loan included deep cuts in domestic spending.

They also examine underlying economic factors, the political agenda, the rise of monetarist ideas, and the Keynesian response. Juxtaposing narrative with analysis, they provide surprising answers to critical questions and reveal how the breakdown of the post-war consensus on the macroeconomic management paved the way for the triumph of Thatcherism.

Buy at Local Store. Enter your zip code below to purchase from an indie close to you.

To Tony Blair, Gordon Brown and their followers, he was an embarrassing dinosaur, a relic of the past they hoped the electorate would forget. A dedicated trade unionist from the provincial working classes, a poor boy who could never afford a university education, a bluff patriot who disdained trendy metropolitan permissiveness and shuddered at ostentatious displays of wealth, he would look bizarrely out of place on today's Labour front bench.

Yet now Brown finds himself in a deeper hole than any that Callaghan ever inhabited.

And however much they dread the Tories' return, old Labour loyalists must find it hard to suppress a smirk. There can be no exact parallels between the crisis of the late s and that of the late s. Still, to echo Mark Twain, history may not repeat itself but it does rhyme. And at first glance the assonances between the late s and the present are remarkable. War in the Middle East and on the edge of the old Russian empire sends oil prices rocketing.

As inflation mounts, families struggle to meet their fuel bills and mortgage repayments. In the headlines: controversies over immigration, energy, the environment, scientific progress. On the television: endless costume dramas, Battlestar Galactica and Doctor Who. On the pitch: England fail to qualify for a major football tournament. And at Westminster, an exhausted, unpopular Labour government stumbles towards apparently certain electoral disaster. Yet the superficial resemblances only take us so far.

A common criticism of our political masters is that they lack a sense of history. But there is such a thing as being prisoners of history, a classic example being the obsession with the false analogies of Munich and appeasement that underpinned support for the war in Iraq. And the past has always been a problem for new Labour, not merely because they knew too little about it, but because they were obsessed with avoiding what they saw as the left-wing mistakes of the s and s.

In truth, the comparison between the present crisis and that of the s falls down almost immediately. One obvious point is that the economic mess of the s was different in character, cause and degree. It did not start with the oil shock, as is often thought; its roots went back to Harold Wilson's heyday in the s, when the figures for inflation, strikes and pay settlements began their ominous rise.

Behind this lay two more serious problems. First, there was the long-term sickness of the British economy.

You broke it, you own it

There was an overvalued pound, inept management, terrible labour relations and feeble productivity, all of which was a recipe for expensive, shoddy and uncompetitive goods. And second, there was a dramatic global shift, the aftershocks of which can still be felt today. As old enemies and newly independent colonies caught up with the Anglo-American industrial leviathans, world commodity prices began an inexorable rise - exacerbated by the Americans' war in Vietnam, which they financed not through taxation but through the disastrous means of simply printing more money.

The terrible consequences of this combination will be familiar to anyone who lived through the s, and while we cannot yet know how the current crisis will compare, it would have to be very bad indeed to eclipse the misery that prevailed from the early s to the mids.

Inflation may seem high now, but when it topped 25 per cent in , supermarkets were reduced to putting sticky labels on their products, which could be peeled off every few days and replaced with higher prices. Oil price hikes left drivers queuing for hours across the western world.

And then, of course, there were the strikes. Not just the big, landmark strikes that everyone remembers - Scargill at Saltley in , the miners against the government in , the Winter of Discontent five years later - but lots of small, unofficial strikes that closed schools and council offices, shops and ports; that turned off the power and sent candle sales through the roof; that brought trains juddering to a halt, and stranded you in Hull when you really wanted to be in Hereford. A common fallacy on the left is that this was some sort of golden age for British workers, a brief halcyon moment before Thatcherism eviscerated the unions and turned us all into greedy consumers.

But the strikes of the s were not a symbol of health: quite the opposite. Old lefties bridle when commentators refer to the industrial anarchy of that period, but anarchy is precisely what it was. Union bosses were not too strong; if anything, they were too weak. Unable to control shop stewards or curb a rash of unofficial strikes, they appalled sensible observers such as the West German Social Democrat Helmut Schmidt, who could never understand why British unions were so fractious and fragmented.

And just because Thatcher's shock troops claimed that the unions had become greedy and ungovernable, it does not mean that the opposite must be true. Once, Callaghan's fidelity to the unions had earned him the appellation "the keeper of the cloth cap". Now the cloth cap was in tatters. Never in 50 years, he said, had he been "so depressed as a trade unionist".

But the real point about the Winter of Discontent, putting aside the rats and the rubbish, the darkened hospitals and the unburied dead, was that it set the seal on a decade in which Britain seemed in terminal decay. For all the ills of British society in , there is absolutely no comparison between then and now. Yes, wealth was less unevenly distributed, as the left is always quick to point out. But there was less and less of it, because living standards were actually falling, especially at the bottom.


It is almost impossible to make the imaginative leap and recapture what this must have felt like: the sensation, after years of affluence and aspiration, of falling behind. Tough, too, to imagine living in a country where nothing works: where landmark businesses such as Rolls-Royce teeter on the brink of bankruptcy, where the trains are dirty and the streets shabby, where the national game has become a blood-and-beer-soaked battleground, where you open a door and the handle comes off in your hand.

The IMF Crisis of 1976 and British Politics

Living in Britain was like being trapped in Rigsby's boarding house in Rising Damp - a seedy, squalid dump where the self-regarding proprietor is forever cutting costs and moaning about his memories of the war, the black tenant faces daily prejudice, and the damp and the cold are always there, seeping into your spirits, morning and night.

One anecdote from the recently published second volume of Donoughue's Downing Street Diary can stand for the whole depressing story. At the beginning of September , Callaghan was dithering over whether to call an election in October or to wait until the spring - a dilemma he got disastrously wrong. His private office, however, was distracted by the problem of his new car. 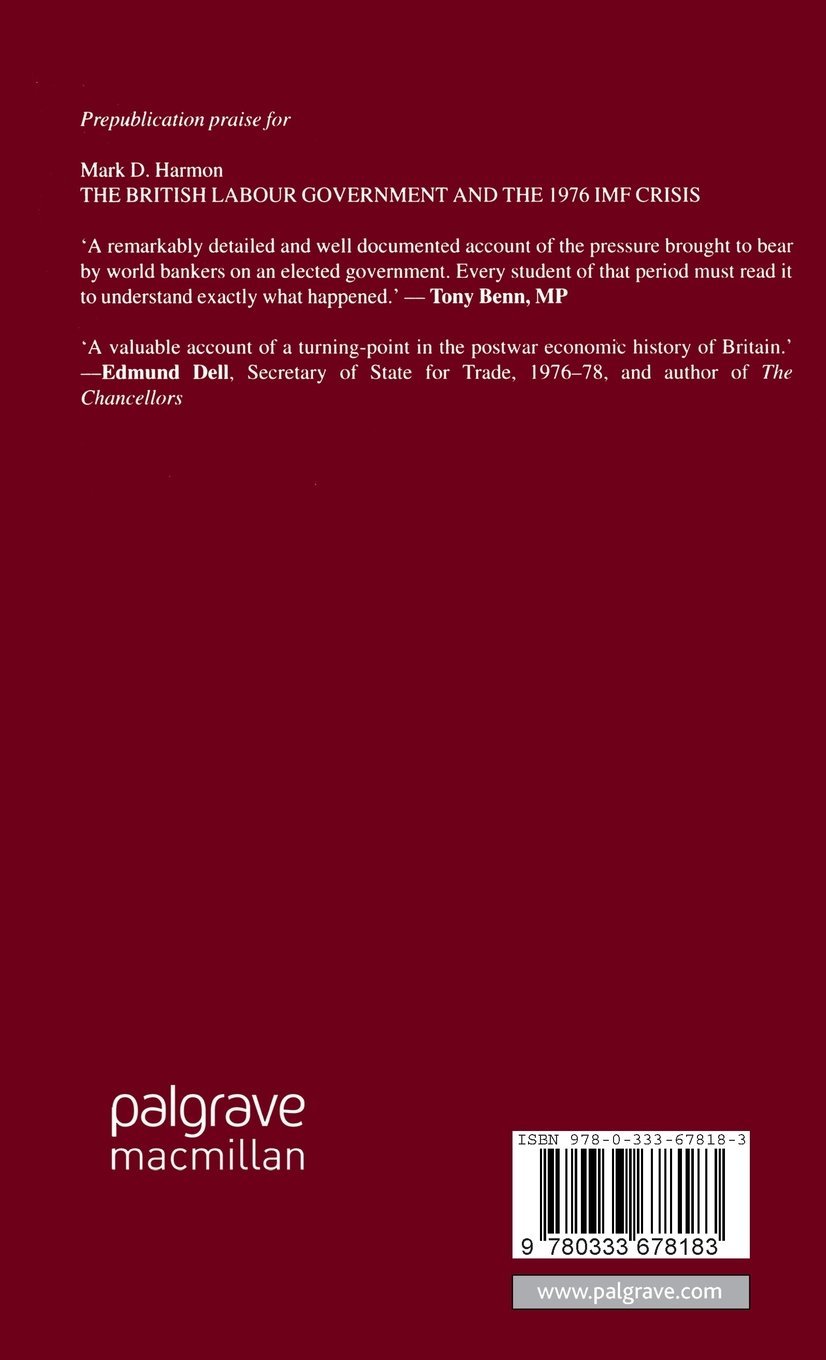 Since the prime minister must be seen to buy British, the office ordered two new Rover 3. Then in August they were sent to be converted to the PM's special safety needs - bombproof, bulletproof, special radio system, etc.


This all cost a vast sum of money. Finally the cars came back from the garage, and one morning Callaghan decided to go for a drive. The car was bowling cheerfully along, the sky clear and bright, and so he tried to open the window, pressing the electronic button that, through the marvels of Rover's s technology, would do it automatically. The PM has now said that he does not wish to see the new cars again. This sense of national incompetence, failure, decay and decline was a central element in British life in the s, from Basil Fawlty railing against his staff to Scotland's football manager, Ally MacLeod, watching in mute horror as his self-proclaimed world champions collapsed against Peru in the national humiliation of the World Cup.